There is absolutely nothing wrong with having recordings of your sex escapade with your partner, as long as you have the capacity to keep it sacred.

But these days, immoralities have started being moral and legal. We have lost every sense of our heritage and tradition as Africans. – There is no big deal trying to explore but loose-guarding is a big fuckup.

NAIJALOADED had earlier reported how Nigerians on social media woke up to the news of the singer’s leaked sex tape and numerous nude photos.

Like that of fellow celebrities Tiwa Savage and ex-BBNaija housemate, Cross, Oxlade’s sex tape was accidentally leaked on Snapchat. – The singer claimed he was betrayed by someone he trusted.

Due to her reputation on social media, the name of the supposed lady in the video was quickly revealed, as she frequently makes spicy films on TikTok and Instagram.

She goes by the name Rachyyveer and she is an Ivory Coast model and brand influencer.

While we are unable to verify her relation with Oxlade currently, she is said to have stated on Twitter that she had always wanted to experience “what intercourse with Oxlade would feel like.”

See the screenshot below:-

Three days after his sex tape leaked on social media, a fast-rising Nigerian singer, Oxlade, has apologized to his fans and the mystery lady in the video that has got everyone talking.

However, reports suggested that the Lady’s family were taking a case up against Oxlade, such that can cause a big damage to his music career.

At a point, we al thought everything was cool between the two victims but later on, a lot of new gists started springing up.

How She Verified She Was The One In The Video

At first, she sounded like she was trying to redeem her image and make everyone believe she is not a bad person.

She wanted everyone to hear her own part of the story and know there is nothing wrong with having recordings of their sexual activities with their partner – this is absolutely true, its fantasizing tho!

One of the basic things in a relationship is trust and once you have it, you can’t doubt anything coming from the relationship. – You just don’t have to loose sanity.

What Was Her Conversation With Oxlade?

The first conversation started with Oxlade greating her, which is enough to say he had her in mind regardless of the battles he is also fighting.

They both lash out and lament at each other which is the right thing to do. –

They both have something to loose but they wouldn’t be in this situation if Oxlade was a real man. its no big deal having sex tapes on your phone but sharing it with friends makes you stupid and childish.

NOTE:- This chat was that of Wednesday, the day the tape went viral. 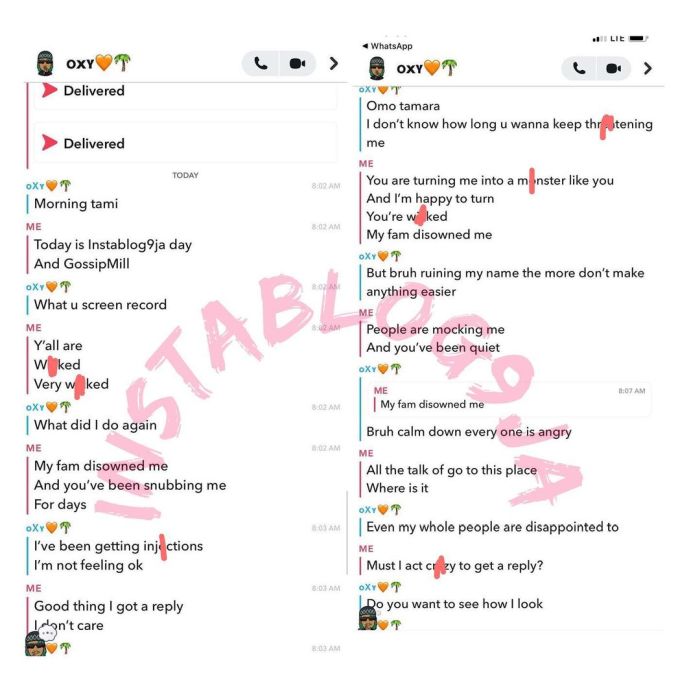 And Did He Really Snub Her?

On Thursday, the reality of backlashes is starting to dawn on them and they have seen, read, and heard different things about them. – Lamentation continued however

Fast forward to Friday on the right part of the first picture, he found out who did the recording among those he sent it to.

They argued about Oxlade releasing a song amidst the scandal still going on and he defended that. This all happened in the early hours of the day.

On Friday evening, they both talked like they had a plan and she had told him about a friend she could stay with in Ghana, he to offered to pay for her flight and monthly keep ups but she shunned it off.

He told her he just wanted her to leave the country till he can finally fix her up but she told him she’s not dumb to accept that offer and Oxlade signed of and this all happened at 9:37 pm

At 6:34 am, she woke up with another allegation that Oxlade drugged her and that she wouldnt be able to go to Ghana to stay with her friend who has like 4 other girls in the same house.

She then laid curses on Oxlade. All these are normal cause she is feeling betrayed and not really good this is happening to her. 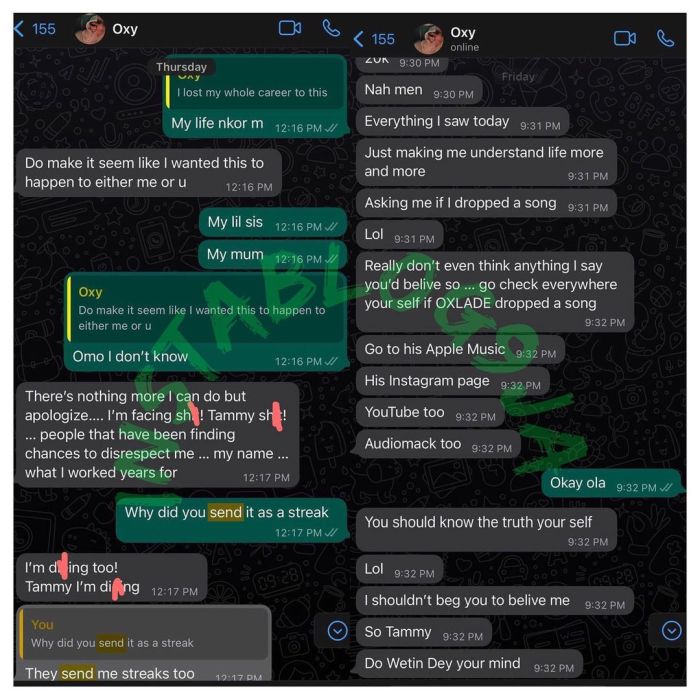 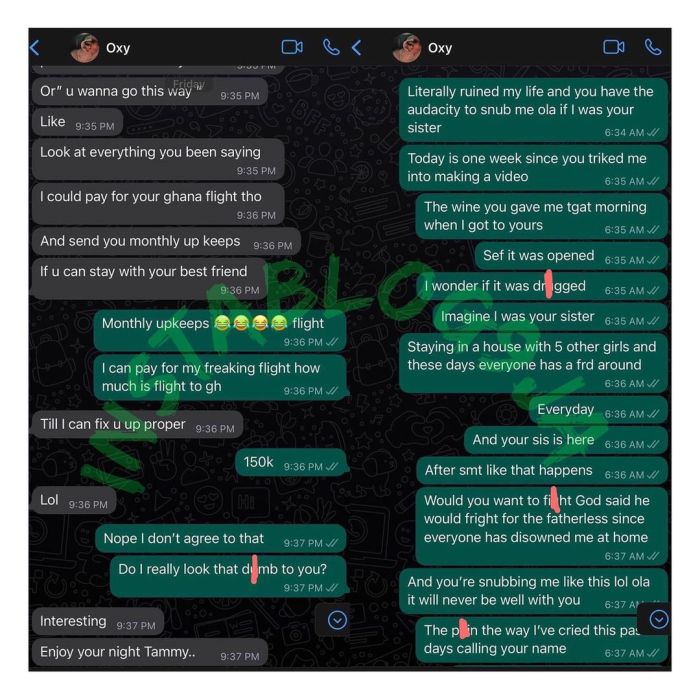 How Did She Become An Opportunist?

She reaches out to someone in Oxlade’s camp, Reports made it known that the person is Oxlade’s manager.

She said she wanted $20k as a pay off to start a new life in another country. She screenshotted he chat with Oxlade to the person and in the Screenshot, Oxlade was seeing lamenting there is no way he could get 8 million Naira or so.

She was particular about what she stands to get from what have already happened. She sounded like she has lost every form of shame.

As seen in the screenshots, she was the one who took the snapshots and sent to our source claiming she was being snubbed by Oxlade, The screenshots are not complete as there are other messages she failed to screenshot as well. 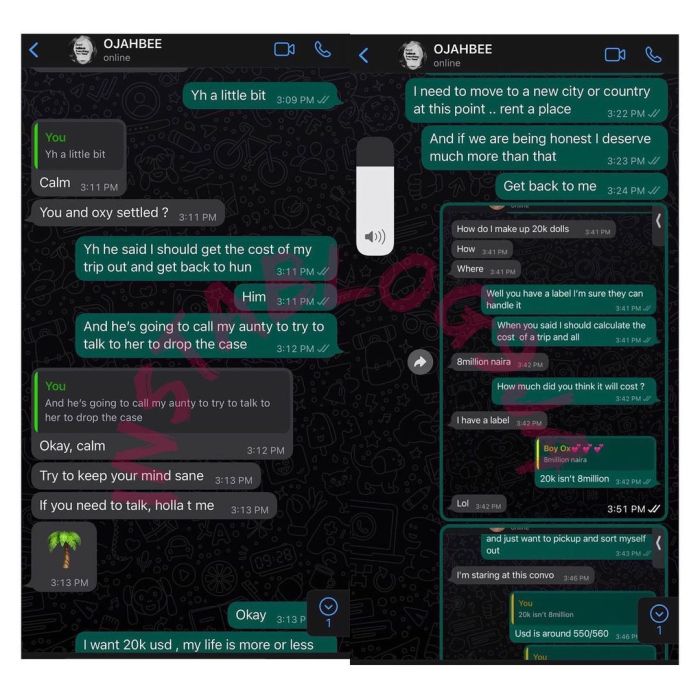 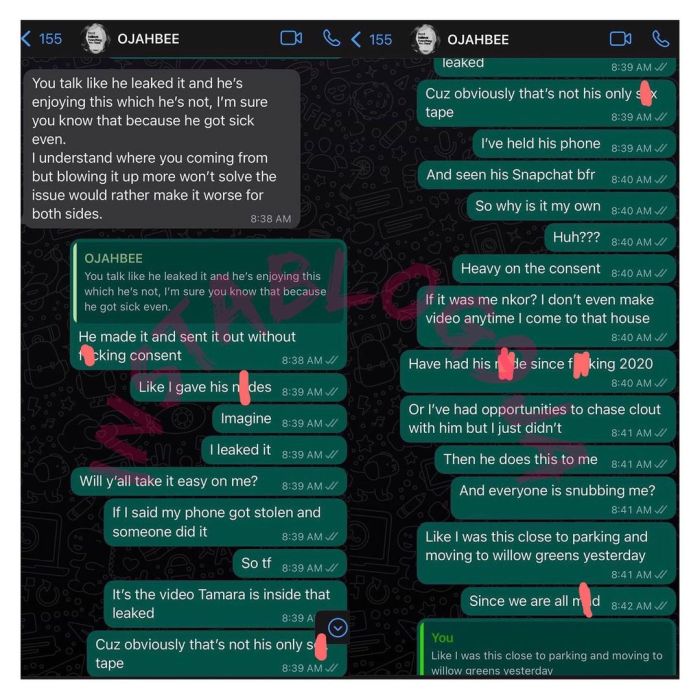 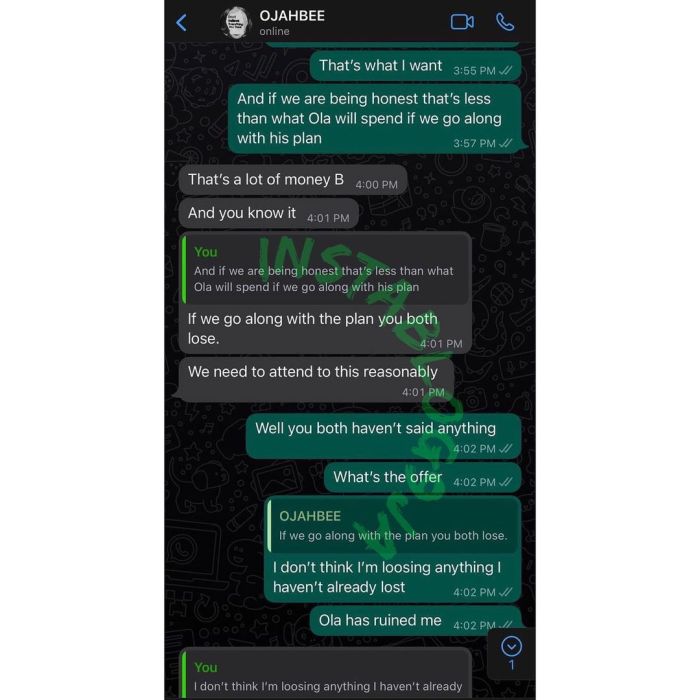 Not to be on anyone’s side but the perception i have about this whole thing is she’s trying to make money off the scandal.

Or should we say she gave her phone to someone else to chat with Oxlade aide? or what?

So Guys, the question here is

What Do You Think About This Whole Issue?

Let us have your sincere say on this