Nigerian rapper, Olamide, has reacted after being offered money by a fan to leak songs by his colleague Wizkid that have yet to be released.

A social media fan had asked Olamide to stipulate the monetary amount he would accept in order for him to release five unreleased songs from Wizkid.

The fan, who goes by the handle @Hadamsnihyihex4, asked the rapper to release Big Wiz’s tracks since he believes the singer won’t be furious with Olamide because they are friends. 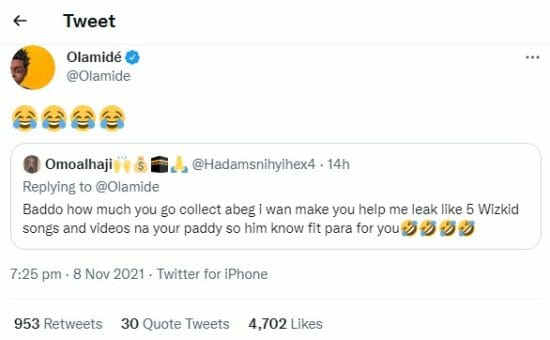 I sincerely love the bromance between Wizkid & Olamide

What Do You Think Will Happen Between Olamide & Wizkid If Baddo Leaked His Songs?

Let’s have this conversation.